Dean Jobb will speak about his book The Case of the Murderous Dr. Cream: The Hunt for a Victorian Era Serial Killer. Before Jack the Ripper, before The Devil in the White City’s H.H. Holmes, the world’s deadliest serial killer was the Canadian doctor Thomas Neill Cream. Between 1877 and 1892 he murdered ten people — nine of them vulnerable young women — in Canada, the United States, and England. Learn more about the four murders he committed in the Chicago area in the early 1880s and how the Illinois justice system failed to stop him.

Dean Jobb is an author, journalist, and a professor at the University of King’s College in Nova Scotia, where he teaches in the Master of Fine Arts in Creative Nonfiction program. The Case of the Murderous Dr. Cream, was longlisted for the American Library Association’s Andrew Carnegie Medal for Excellence and received an honorable mention in the Chicago Writers Association’s Nonfiction Book of the Year awards. His book Empire of Deception, the story of 1920s Chicago con man Leo Koretz, won the Crime Writers of Canada award for best true crime book and was chosen as the Chicago Writers Association’s Book of the Year. Dean writes the monthly true crime column “Stranger Than Fiction” for Ellery Queen’s Mystery Magazine and his features and book reviews have appeared in other major publications. 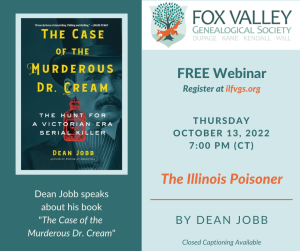 ONLINE-What the Heck Does That Say?: The Challenge of Difficult Handwriting by Pam Vestal, February 9, 2023 7:00 PM (Central)

ONLINE-How to Use Social History in Genealogy Research & Why You Should by Lisa Lisson, January 12, 2023 7:00 PM (Central)

If your genealogy research is stuck or you’ve “lost” your ancestor, stop actually looking for…

Once you have identified the location for a family event, you have an opening to…